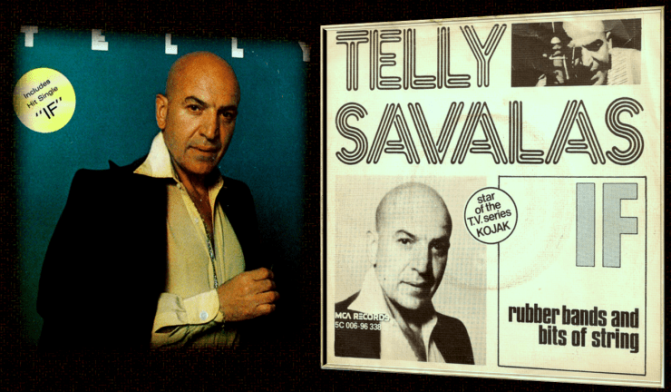 Aristotelis “Telly” Savalas (1922-1994) was an Academy Award-nominated and Emmy Award -winning American film, television actor and singer. Best known for playing the title role in the 70s crime drama Kojak. So, what the hell is going on in this music video? Some amongst us here might not know Savalas had a bit of a music career to go along with his memorable screen roles. He had albums, concerts, TV crooning appearances, and his rich baritone was soothing even if it wasn’t the most melodious of instruments. His spoken word version of Bread’s “If” was released as one-hit wonder song, also noted for his deep, gravelly voice, of course his bald head. Then he wrote in the liner notes to his first album, “People know that singing is not my bag .. I can only make mistakes by pretending to be a great singer”. But beyond that, there are a few other things going on in this rendition of “If” that make it spectacular. Here’s the most amazing fact about the Savalas version, although it failed to chart in the United States. It was a #1 single in the UK, spending two weeks at the top in March 75s. Further evidence that the British sense of humour is sometimes inexplicable to Americans. With his film and television work lives on, so does his musical portfolio. We can thank God for his great talents. Hats off to Telly Savalas, may you Rest In Peace.